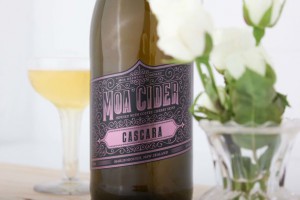 The moral dilemma that comes with wanting to keep the mind pure and the skin youthful, or instead reaching for a crisp alcoholic beverage to reflect and unwind after a hard day’s slog, is a constant struggle, says the team at Moa Brewing Co.

Combining the best of both worlds, their solution to consumption remorse adds a heavy dose of the latest superfood, the Cascara or coffee cherry berry, to its crisp apple cider. The resulting guilt-free, world first brew, Moa Cascara Cider, is doing all sorts of good to your body as you drink.

Cascara is the skin that remains after coffee beans are removed from the inside of a coffee cherry, a thin-fleshed fruit which ripens around nine months after the coffee plant flowers. Now found as a key component in luxury beauty products such as Priori or simply brewed as an herbal health tea, for centuries the skin was discarded as a by-product to collecting the caffeinated beans within. However, when researchers realised that the coffee cherry pickers’ hands were soft and youthful when compared to their often over-exposed and sun-damaged skin, its anti-ageing properties were uncovered.

Having cottoned on to Cascara tea’s refreshing and anti-oxidant rich attributes, a chance meeting between Nelson-born Claris Jones-White and Moa founder Josh Scott saw the collaboration take place. Claris, a self-proclaimed coffee and tea nerd, has consulted on all levels of brewing prowess from New York to Johannesburg via multiple trips to the fields of Central and South America where she discovered the crop to cup (or in this case bottle) potential at a Costa Rican farm producing the coffee cherry skins. Taking the core components to Moa founder Josh Scott, who is always up for a mad scientist moment, the two got to work immediately infusing the Cascara coffee cherry skins to his classic dry apple cider.

By fashioning what became a giant tea bag, with each dunk the Moa brewers added the berry’s purported health benefits that include preventing premature aging, heart disease, high cholesterol, asthma and Alzheimer’s to the cider profile. Both collaborators are thrilled with the end product.

“The black Doris plum properties and tea-like tannins of the coffee cherry skins work well with the dryness of the traditional apple cider, creating an almost peaty or whisky like finish. Serve it straight-up chilled, over ice or with a touch of fresh lime in the heat of the summer sun,” says Claris. Josh adds, “I never feel guilty about the drinks I consume, but I know that’s not the case for everyone. Knowing I’ve played a part in unlocking the secret to eternal youth is a career highlight.”

The result is an easily sippable cider with fruity flavours of apple, plum and cherry, a hint of oak from the French Oak chips also used in the fermentation process and a slightly peaty aftertaste. The cider is also naturally much lower in sugar than many other cider brands currently on New Zealand shelves, another positive for the health conscious consumer.

The Moa Cascara Cider comes in a cork and cage sealed 750ml bottle, with an RRP of $13.99. It is available for purchase exclusively from selected Liquorland stores nationally.