In the final week in which entries are accepted for the NZ Chocolate Awards 2020, the organisers have announced a robust judging panel.

In March an esteemed panel of food professionals lead by international chocolate judge Elle Coco will smell, taste and assess a selection of New Zealand chocolate to find and name the country’s finest. Gold, Silver and Bronze Medal winners will be named on Tuesday 31 March and the NZ Chocolate Awards 2020 Supreme Winner will be announced on Tuesday 21 April.

Elle Coco is an experienced chocolate judge at the British Academy of Chocolate and the International Chocolate Awards. In 2018 she moved to Wellington from London where she ran chocolate making workshops and classes for

British chocolatiers, department stores and global companies, including William Curley Pâtissier, Harrods and PWC. In addition to running workshops, Elle has worked with new and established chocolate makers, including Damson Chocolate (UK), Tri Island Chocolate (Grenada, Caribbean) and Stamba Chocolatier (Georgia, Caucasus). Elle has hosted education and tasting sessions at London’s ‘The Chocolate Show’ and ‘The Grenada Chocolate Festival’ in the Caribbean. She was head judge when the NZ Chocolate Awards were last held in 2018.

NZ Chocolate Awards Co-Director, Kathie Bartley says after securing Elle as head judge they wanted to ensure they had a robust judging panel with plenty of experience. “Additionally, to ensure the integrity of the Awards, we didn’t want to include any chocolatiers or chocolate makers who would be entering their chocolate.”

She says Elle will be joined by a selection of chocolate and food experts who specialise in pastry, chocolate and judging. They are; Luke Owen Smith (owner of The Chocolate Bar in Wellington and regular judge), Arno Sturny (senior lecturer at AUT School of Hospitality & Tourism teaching the diploma in patisserie who has just completed a Master of Gastronomy specialising in the history of New Zealand chocolate), Patrice Lucas (AUT tutor and qualified Master of Patisserie and Chocolate), Juan Balsani (Head Chef at Auckland’s Baduzzi), Ganesh Khedekar (Head Pastry Chef at pastry chef at LSG Sky Chef), Jasbir Kaur (tutor at Ignite Colleges and accomplished international judge), Tamara Rubanowski (Head of Content at FMCG Business and experienced industry awards judge), Helen Jackson (food writer and self-confessed chocoholic), Fiona Smith (food writer and experienced food judge who was Head Judge of the Cuisine Artisan Awards for a decade), and Ginny Grant (food writer and regular restaurant and food judge).

Entries are accepted on the NZ Chocolate Awards website https://nzchocolateawards.co.nz/ until 5pm Friday 28 February 2020. The entry fee is $100 plus GST per product. Chocolate must arrive in Auckland between Monday 2 and Wednesday 4 March ready for judging on Saturday 7 March 2020.

Winners of each Category and Gold, Silver and Bronze Medal winners will be announced just ahead of Easter on Tuesday 31 March 2020.

Kathie is hoping the Awards timing will provide an opportunity for chocolate makers to showcase their creativity by entering their specially created Easter Eggs and Easter chocolate confectionary in the newly created Open Class judging category.

Kathie thanked the NZ Chocolate Awards sponsors; NZ Life & Leisure, FMCG Business, Label & Litho and the Chocolate & Coffee Show. “Without these businesses supporting the Awards we would not be able to celebrate the finest kiwi chocolate – which is exactly what we’re excited to do!” 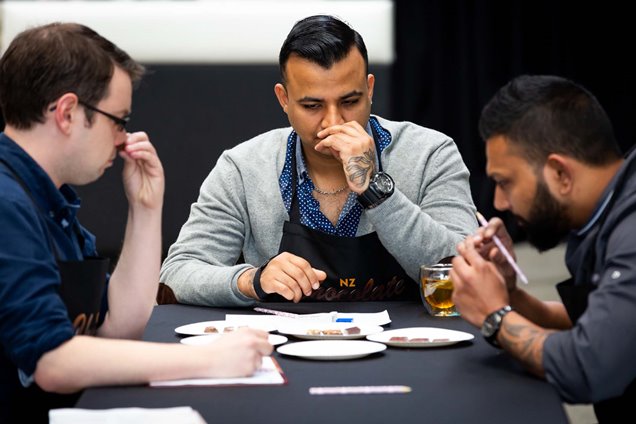 The NZ Chocolate Awards 2020 Supreme Winner will be announced at a Champions Party in Auckland on Tuesday 21 April. This is a joint event with the winners of the Outstanding NZ Food Producer Awards. Tickets to this party will be available for purchase, initially to Gold Medal winners and then extended to other medal winners and entrants and the public.