A venison, mushroom, bacon and cheese pie proved the perfect combination of flavours for judges unanimously voting it the 2017 NZ Bakels Supreme Pie Awards winner. Baked by Lee Ing of Fast & Fresh Bakery of Taupo, the Supreme pie came out on top of 5696 entries.

NZ Bakels Managing Director Brent Kersel says: “the winning pie first caught our attention when it won gold in the Gourmet Meat category before going onto the final judging stage. It looked great out of the oven, pastry rich and golden with the filling venison, mushroom, bacon and cheese combining well together. The venison had great flavour and texture.”

Sean Connolly, this year’s Celebrity Chef Judge, noted that cooking venison in a pie, where the end result was so moist and succulent, demonstrated a high level of culinary skills and the flavours worked together to just melt in the mouth with a perfect pastry casing.

Lee Ing bought Fast & Fresh Bakery 14 months ago after working in the bakery for two years, learning all he now knows about making pies from the previous owner. Born in Cambodia, he came to New Zealand 12 years ago to start a new life and discovered that he had a natural flair for baking.

In the Commercial/Wholesale category, Eddie Grooten of Dad’s Pies in Silverdale was awarded a Gold medal.

The NZ Bakels Supreme Pie Award was presented at an awards dinner in Auckland on August 1. Entries this year, the 21st year of the competition, were up by 10 percent , says Kersel, with the two largest categories Mince & Cheese and Steak & Cheese, going head-to-head with 417 pies in each category. In the Gourmet Meat category, flavours and pastry styles kept judging fresh and interesting with a goat vindaloo pie, a seafood pie with octopus, and a lamb cheeks with vegetables, herbs and anchovies pie, for example.

The Vegetarian category featured new ingredients including yams, swede, and sugar snap peas. Wholemeal and spelt pastries are emerging in this category, while gluten-free pastry is growing in popularity in the Café Boutique category.

Kersel says: “A number of entries this year have used their imagination and flair to make the finished product look different and exciting. Everyone started talking about the ‘Kiwi’ pie when its box was opened. The pie top featured a Kiwi with koru patterns made out of poppy seeds. The pastry was even moulded into fern leaves! In the Gourmet Fruit category the presentation of the pies was stunning. One pie, a pineapple, lime and coconut creation actually looked like a slice of pineapple.” 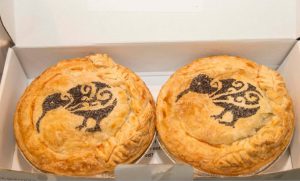 NZ Bakels originally launched the Supreme Pie Awards in 1996 to improve the quality of pies and pastry.

“Year-on-year the Awards have successfully achieved that and continue to lift the bar to a level we never imaged. New Zealand consumers now know what a quality pie looks and tastes like so if a bakery is to succeed their standard needs to be high,” says Kersel.