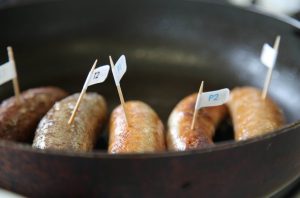 Judgement time is drawing nearer for butchers as the hunt is on for the nation’s best tasting sausage and with National Sausage Day looming, the search is perfectly timed. Sausage makers from all around New Zealand are perfecting their recipes and preparing to send entries into this year’s Devro Great New Zealand Sausage Competition in the hopes of being announced the Supreme winner.

The judging panel will be made up of a mixture of New Zealand’s favourite foodies, butchers and industry members. These judges, over a two-day period will sample and examine all competition entries to determine the top twelve sausages which then go on to the final taste test.

Sausages are judged prior to cooking on their inner and outer visual appearance then once cooked, on appearance, aroma, texture, composition and taste.

Having judged the competition for the past four years, past President of Food Writers New Zealand, Kathy Paterson, knows exactly what goes into an award-winning sausage. “As judges, we are looking for a good meat to fat ratio along with the appropriate mix of herbs or spices,” says Paterson.

The winning sausage will be announced at an awards event on October 19, in time to celebrate National Sausage Day on the following day, October 20.

In addition, members of the public will be called upon to have their say in naming the winner of this year’s People’s Choice Award, with a public tasting being held on Friday October 13 at Smales Farm Business Park in Auckland’s Takapuna.