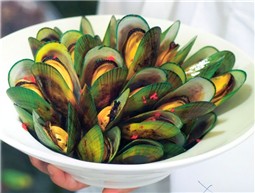 Scientists have used some surprising and ingenious methods to get Greenshell™ mussels to breed in captivity and their efforts could soon be worth $200 million a year to the New Zealand economy. Warm baths and vibrating devices are just two of the clever tricks New Zealand scientists have employed to get the famous (and somewhat shy) Greenshell™ mussels to breed on cue. The first crop from the SPATNZ hatchery is now ready to harvest and to eat, after years of investigative work in Nelson, New Zealand.

Scientist and SPATNZ boss, Rodney Roberts says it’s taken quite a bit of experimenting to get the mussels to give up their secrets. “Normally these mussels breed in the wild and we wait for their babies, known as spat, to wash up on beaches attached to seaweed or land on catch ropes. That made life difficult for New Zealand mussel farmers, who had to cross their fingers and hope they would have enough spat for their farms from year to year.”

“We had to work pretty hard to figure out how to get the Greenshell™ mussels to breed reliably in our hatchery. We experimented with lighting, different bath temperatures and sounds and we finally settled on a combination of light, temperature and small vibrations that seems to really get the mussels going, encouraging them to produce maximum quantities of sperm and eggs.”

Rodney says the process might sound funny, but it has yielded seriously good results. “We are now able to produce billions of mussel eggs each month and the great news is that these are growing into strong, faster growing and more consistent mussels.”

Gary Hooper the CEO of Aquaculture New Zealand says: “Hatchery spat is a game changer for our industry, it opens up all sorts of opportunities around selective breeding and product development in high value areas like nutraceuticals and superfoods. New Zealand mussels are already world famous but the hatchery unlocks a new level of innovation to take our industry to another level.” 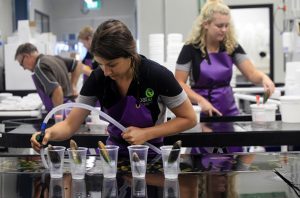 The SPATNZ hatchery and the science behind it is the result of a collaboration between the Ministry for Primary Industries (MPI) and New Zealand’s oldest and biggest seafood company, Sanford, through the Primary Growth Partnership.

Sanford CEO Volker Kuntzsch, who has a Masters in Zoology, says he’s delighted to see the innovations at SPATNZ paying off. “It’s always very satisfying when scientists can say that they’ve done it – they’ve confronted a problem head on in a smart way and they’ve solved it.”

Sanford and MPI are each investing $13 million into this PGP programme. Sanford and its contract growers will initially benefit from the research and technology but a requirement of this Primary Growth Partnership programme is that in time the technology will be shared with everyone in the industry.

SPATNZ hatchery mussels are at harvest size now in the Marlborough Sounds and close to 500 tonnes of them will be harvested over the coming months.