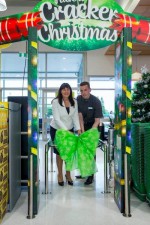 The opening, which was also attended by local MP David Bennett and members of the Hamilton community, featured a presentation of a trolley of groceries for the local Salvation Army foodbank.

Mayor Hardaker extended her congratulations to Countdown for the vote of confidence that launching a new supermarket signals for the city. She said:“We all know how fast Hamilton’s population is growing and the opening of Countdown Claudelands is an indication of that. The fabulous new store is looking great and is in a very busy area. The surrounding community has been looking forward to seeing it open and just in time for Christmas.”

Local MP David Bennett said he was very pleased to see Countdown making an investment in Hamilton, especially in the Claudelands and Hamilton East area. “The new store is conveniently placed in the heart of the city, close to the University of Waikato and residential areas. I am confident that Countdown Claudelands will be very well patronised by members of our community as it will be greatly beneficial for the community going forward.”

Store Manager David Wynne says he is excited to be a part of this brand new Countdown, and can’t wait to get to know all of the store’s new customers.

“There has been a big build up to today’s opening and the amount of effort that has gone into getting the store ready today has been phenomenal. Countdown Claudelands brings with it 66 new jobs, and we’re excited and proud to welcome those new staff members into the Countdown team.

“We think our customers will love our new store, which has all of the features you would expect to see, plus added extras like our pharmacy, sushi bar, and in-store cafe,” says Wynne.

Countdown’s Acting Managing Director, Pat McEntee, says the business is excited to be bringing their extensive range of food and groceries to the Claudelands community.

“At Countdown we strive to help Kiwi families eat well for less. We do this by providing our customers an extensive range of groceries at low prices every day, as well as a wide range of products on special every week,” McEntee says.

Claudelands will join Countdown’s Food Rescue programme, which has donated $3.5 million worth of food to food banks around New Zealand in the last year.

The new store has been designed with Countdown’s latest features and includes wider aisles, a more expansive fresh produce department. The store is also equipped with energy efficient fittings and equipment which help us achieve our goal of holding our carbon emissions to 2006 levels despite a 37% increase in selling space.